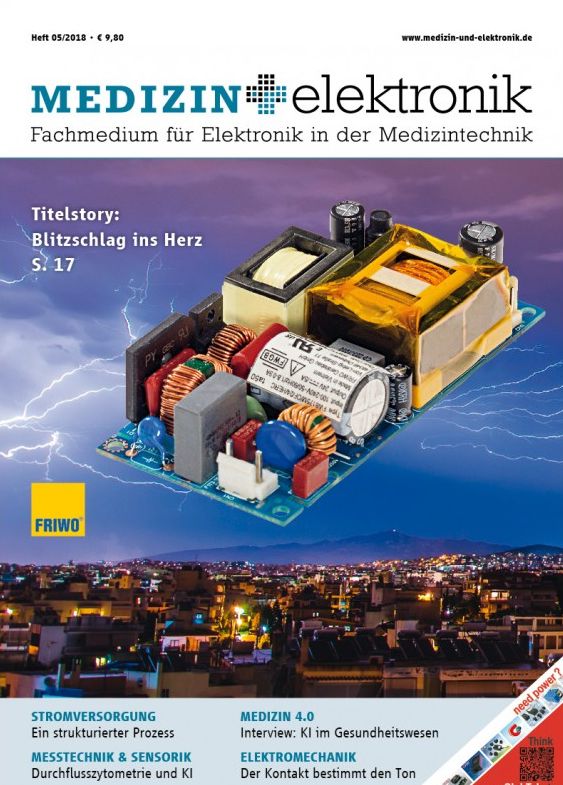 Heart failure – one of the worst incidents in medicine. If the heart fails, everything fails. The same applies to the power supply of an application: If its performance is unreliable, the entire system is paralyzed – which can have the worst conceivable consequences in medical technology. Examples range from malfunctioning instruments and apparatus in the midst of a complicated operation to a possible worst-case scenario such as the unintentional cessation of life-support measures,

It is therefore important, especially for medical power supplies, to strive for the highest possible reliability and to guard against any incidents. Two possible interference factors are the phenomena “surge” and “burst”, for which the corresponding interference immunity is regulated in the IEC 61000-4 standards. This article fundamentally describes the phenomena mentioned as well as the immunity to be complied with according to the applicable standard, and gives some tips for the practical implementation in engineering as well as for the selection of a suitable power supply.

Overvoltage and its impacts

“Overvoltage” describes an electrical voltage which exceeds the permissible tolerance range of an electrical system’s nominal voltage. For an electrical device, the phenomenon sometimes has a destructive effect of key significance: The excess energy can destroy components of the electrical circuit and can cause errors and equipment failures. It is therefore of utmost importance to consider the immunity against possible occurring overvoltage when engineering a power supply.

But when does a so-called overvoltage actually occur? Within the European AC voltage grid, the rated voltage according to EN 60038 is 230 V with a tolerance of +/- 10 % in single-phase systems. Thus, voltages of more than 253 V are to be considered as overvoltage in our power grid by definition. Such overvoltage can either occur permanently, for example because of a faulty electrical installation, or for a short time, due to bolts of lightning or switching operations.

While the protection of a device against permanent overvoltage would be possible only with extreme effort and is also unnecessary because of the rare occurrence within a typical AC grid, short-term overvoltage is quite more common than expected and requires appropriate safety measures.  The overvoltage can occur both symmetrically between the electrical conductors as well as asymmetrically between electrical conductors and earth.

In general, one distinguishes two phenomena of short-time overvoltage, which, in accordance with the corresponding standards, should be examined more closely:

The phenomenon of surge voltage is regulated in IEC 61000-4-5. This standard describes the “Immunity test of electrical and electronic equipment, devices and installations against shockwaves (surge voltages and currents)” and was adopted in March 2015 in its current version.

Even the mere number of yearly lightning strikes illustrates how often we encounter short-term surge voltage in a power grid: last year, over 450,000 lightning flashes hit Germany, which – depending on the location – had a corresponding impact on our power grid. This number seems relatively low in comparison to previous years: in 2015, for example, 550,000 flashes were noted, in the stormy year 2007, a record level was recorded with about 1.1 million flashes. Added to this are the countless switching operations, which are currently increasing due to a switch from centralized to decentralized power grid (smart grid), as well as other influencing factors which can also lead to high pressure on the power supply for a short time.

Medical applications and devices are typically located in buildings and are therefore tested with a pulse definition of 1.2/50 μs and 8/20 μs for the power supply.

The different test severity levels are now set by the peak value of the open circuit voltage. IEC 61000-4-5 defines values for four different severities. The degree of severity required for a device depends on various factors and is specified in the corresponding product standard of the electrical devices. In medical technology, this means EMC safety standard IEC 60601-1-2 in its 4th edition. Electrical appliances of protection class II to be used in buildings must have an interference immunity to surge of severity level 3. This also applies to medical-electrical appliances, both in the hospital environment and in the so-called home healthcare environment.

There are different methods to protect devices against destruction by surge. The simplest way is to match the affected components such as diodes and capacitors with the appropriate voltage. At higher test voltages, however, this is no longer possible, which is why components are required which limit the voltage within the device. This is done by using varistors (VDRs) or gas discharge tubes which become conductive at a certain voltage and convert the surplus energy into heat. Gas discharge tubes are not permitted for every application. Since these components not only have a voltage-limiting effect, but short-circuit the circuit when the breakdown voltage is reached, they may only be used in DC circuits. They should not be used in AC supply lines, since a short-circuit in a supply line leads to a long-lasting high current, which can also trigger the house’s main fuse and shut down the power supply for all devices permanently. Consequently, VDRs are used for AC supply lines.

Transient disturbances are caused by brief switching operations, such as the disruption of inductive loads or the bouncing of relay contacts in a power supply grid as well as in control and signal lines. These disturbance variables are voltage peaks which are coupled in lines in so-called “bursts”. Characteristic are the high amplitude, the short rise time, the high repetition rate and the low energy of the transients.

The handling of this phenomenon is fundamentally regulated in the IEC 61000-4-4 standard: “Immunity test against fast transient electrical disturbances/burst”. In its current version of April 2013, the standard specifies the repetition rate to be tested for the transients at 5 and/or 100 kHz, with the actual value of the burst phenomenon being closer to 100 kHz. The test specification 5 kHz still dates back to a time when the test equipment was incapable of producing transients with such a high repetition rate.

The coupling of the fast transients is carried out during the test either by means of a coupling capacitor directly applied to the supply lines, or indirectly via a capacitive coupling pliers to control and signal lines. The degree of severity to be maintained in the burst is ultimately determined in the respective product standard of the device, for medical devices degree 3 applies.

In general, burst pulses are not as destructive as surge pulses. However, they often lead to unwanted behavior of devices, which can surface, for example, in form of flickering displays or incorrect circuit measurements. At very high amplitudes, a device can ultimately be destroyed. The general problem with burst pulses is that they can only be filtered out to a very limited extent. In this case, a VDR is only of limited protective suitability since the response time of these varistors is too long. In contrast, the use of fast suppressor diodes can serve as a possible solution.

Purchasers and engineers should focus on compliance with the IEC 61000-4-4 and IEC 61000-4-5 standards when selecting the appropriate power supply for their application, to protect their application from the destructive effects of the phenomena ”surge and burst”. These standards must be enforced by all standard medically approved power supplies in accordance with IEC 60601-1-2, so users initially consider themselves on the safe side.

However, especially for particularly safety-critical applications, such as patient monitoring systems or life-sustaining systems, the values required by the standard should rather be considered pedestals. Here it is recommended to examine the application and its corresponding safety precautions together with a power supply expert in order to achieve the best possible interference immunity – at FRIWO, for example, with designs of up to 6 kV surge resistance.